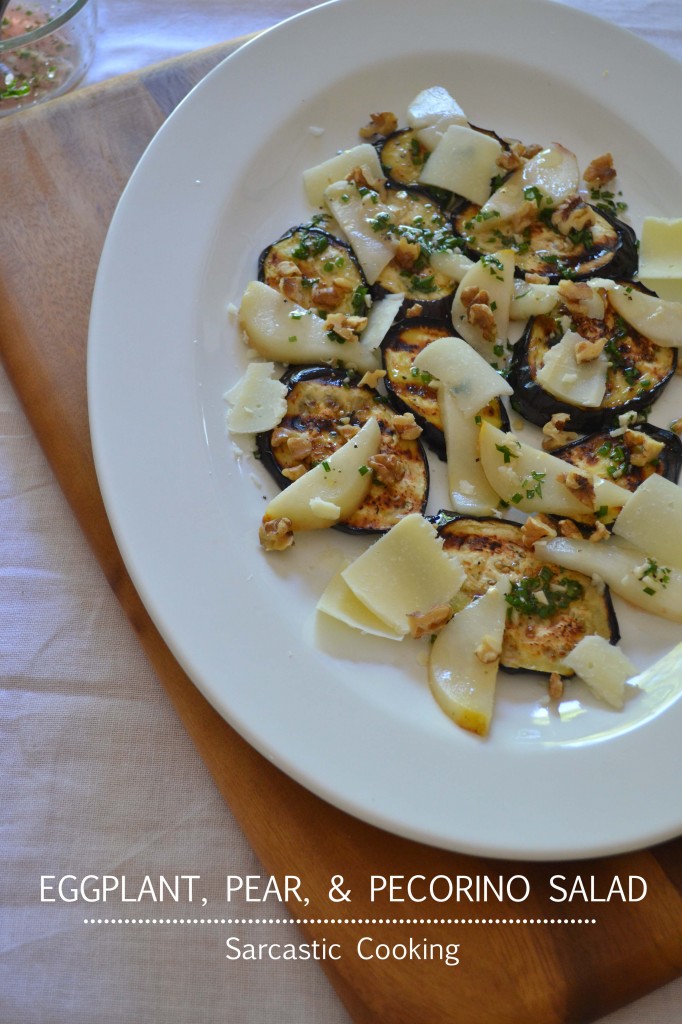 Mike is gone a lot during the school year. While part of me is ecstatic with all the extra “me time,” another part of me is sad that we spend so much time apart.

For example, this past Saturday, he had to coach a night football game. He left to head to school around noon. He did not return home until eight o’clock! I love to spend my weekends with Mike, shenanniganing around, laughing, lounging, and watching movies. I can give up time during the weekdays but, the weekends are harder.

Now while you want to say, “Womp, womp” or play sad music while reading that above statement, don’t cue up the band just yet.

I don’t like to fixate on missing him, so the ecstatic part of me that loves alone time made plans with Stephie for a little late lunch and afternoon of fun. Then, later in the evening, I pulled an eggplant out of the fridge and made a gorgeous fancy meal for one. Well, it was actually more like a salad for six.

I sat at the dinner table with a beautifully plated salad and ate it directly off the serving platter with a good glass of cheap Trader Joe’s red wine. By the time I finished all the evidence of the fancy salad, Mike came in the door to some homemade chicken tenders I had whipped up for him because I am such a good wife! Then we went back to our normal weekend routines… Falling asleep on opposite couches by ten p.m. to the glare of the tv.

Pinch of Salt and Pepper 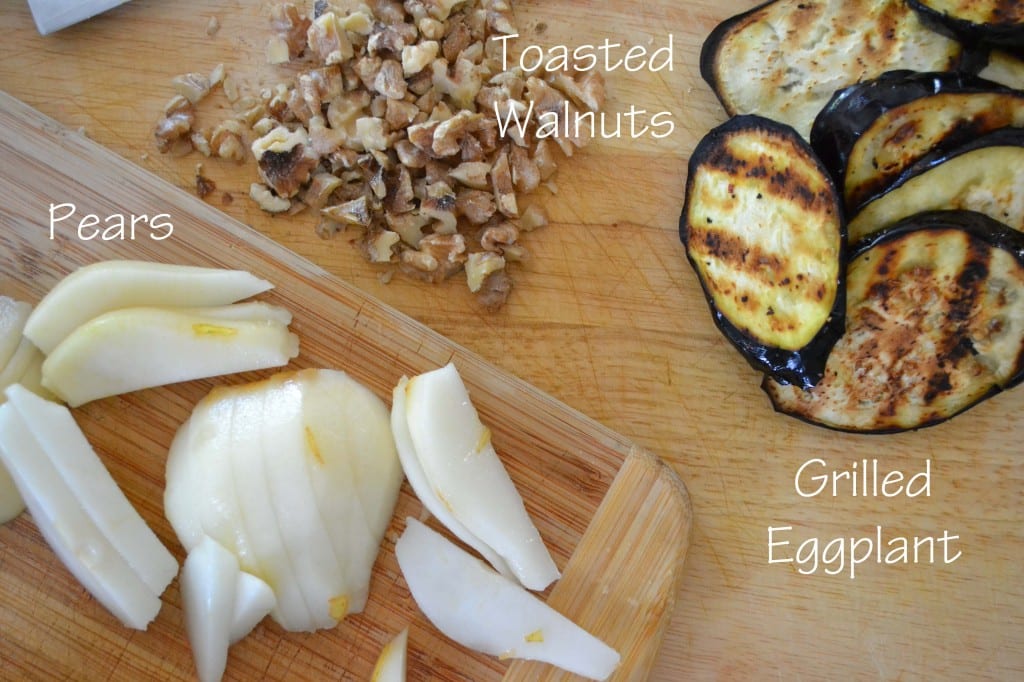 In a small pan over medium/low heat, toast the walnuts for about 5 minutes until lightly browned. Let cool, and then coarsely chop.

Light a grill or preheat a grill pan until hot. Brush the eggplant slices with olive oil and season with salt and pepper. Grill the eggplant over medium/high heat until the skin is tender, about 4 minutes per side.

In a large skillet over medium heat, melt the butter. Add the pear slices and cook just until soft, 3 minutes. Add the brandy and quickly toss the pears to coat them. Remove the pears from the heat.

To make the dressing; in a small bowl, whisk 3 remaining tablespoons of oil with the garlic, vinegar, 1 tablespoon of the parsley and half a tablespoon of the chives. Season the vinaigrette with salt and pepper. Set to the side while you arrange the salad. 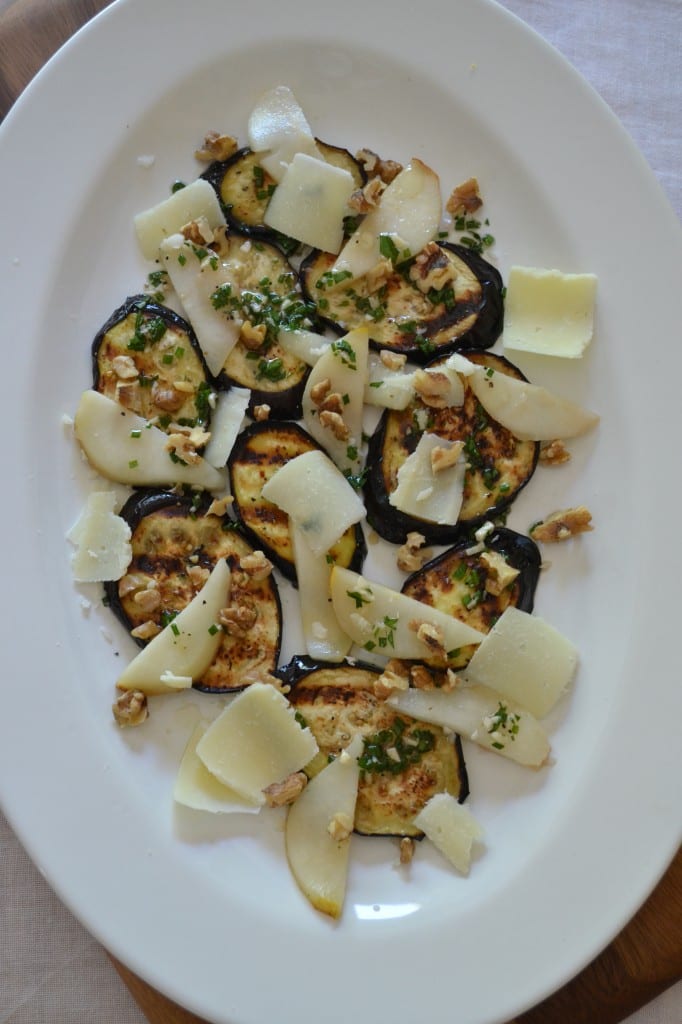 Note: This is unfortunately not very good as leftovers the next day.

Recipe Adapted from Food and Wine 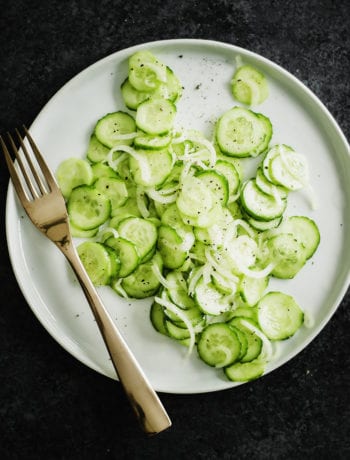 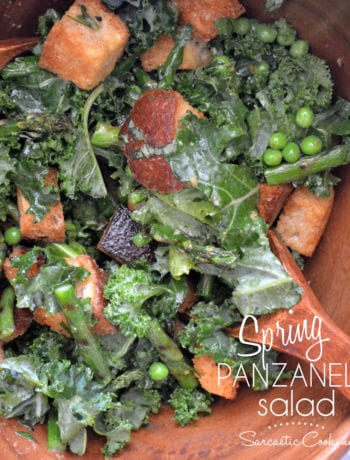 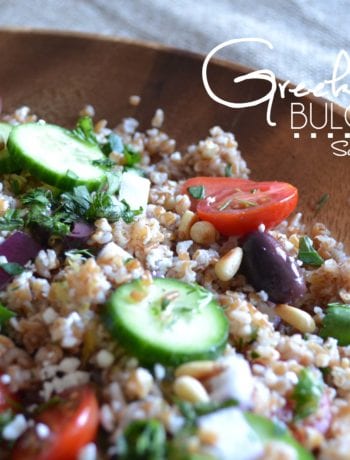